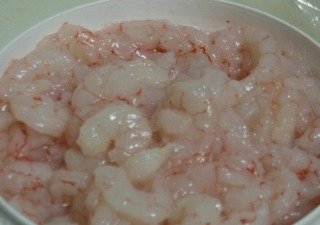 The weather has been extremely warm recently in San Francisco. Last week-end, I was supposed to cook a three courses meal for some friends, and it was so hot that I was really wondering what type of food we could have with this temperature. All kinds of ideas went through my mind, but I decided to create a very fresh salad, with prawns and rock shrimps.

Rock shrimps are actually quite interesting to cook with. It can be very mushy and not good if you’re not careful. But if fresh and well cooked, it’s delicious.
The recipe for this salad is very simple. For your preparation, minced some garlic and shallots, roughly chop some mint, and finely chop some cilantro. Throw the prawns in some boiling water with lot of pepper and some salt, after 2 minutes, remove them, and then throw the rock shrimp. One minute later, they’re cooked! Throw the prawns and shrimp in ice cold water.
Mix some mache salad with the mint, garlic, shallots and cilantro. Add some pepper and salt. Add the shrimp and the prawns. Then add the juice of 1 lime. Add a little bit of olive oil. Salt. Done
This is a very easy and refreshing dish.
Have fun!
Tagged prawns, recipe, rock shrimp, salad, Salads, san francisco
Leave a comment
Uncategorized

Andrew posted on his Twitter account that he just got reminded that he had asparagus for lunch. I then asked him if he had green or white asparagus. He was surprised by my question. He hasn’t seen anyone serving the white ones around here. That got me thinking I should post this recipe, inspired by my grand mother.

Every Christmas, when i was really young (so yeah, that’s actually quite a while ago), my grand mother was preparing white asparagus for us. I believe at the time it was considered as a delicacy in that part of France (Lyon). At least, it was for us. The recipe is dead simple, but if well done, it can turn really good.

Since white asparagus are easy to find in california at this time of the year, I’ve recently asked my mom to cook them for me, same style. It was delicious.

The key is to prepare the asparagus. You need to peel them and discard the end as it’s the tough bit. Some folks only keep the head, which are really nice and tender. Boil some water, add salt, pepper, and one bay leave. Simmer the asparagus until tender. Timing depends on how big the asparagus are. Don’t over cook!

Meanwhile, prepare the vinaigrette. That part is very important. For me, the best vinaigrette for lettuce salad or white asparagus is heavy on mustard. And the only mustard that’s worth buying is the “Maille” one (original). Mix 1.5 to twice more mustard than red vinegar in a bowl (don’t put too much of it, like 2 tablespoons of mustard and 1 tablespoon of vinegar will do). When well mixed, slowly whisk in some canola oil (5 times more than mustard). It will turn almost like mayonnaise. Salt, white pepper and you’re done.

Serve the asparagus warm, with some vinaigrette on top of it.

That’s all. And that’s delicious!

This is a classic, but since I wrote about some greek food in my past post, I thought I would mention here quickly how to make a good greek salad.

In Greece, the greek salad is really a simple dish, based on great ingredients (isn’t it always the case?). So, let me say it loud and clear. If you can’t find good tomatoes, don’t even try. It won’t be good. Also, don’t worry too much about the cuts etc…

Cut the tomatoes (3) in quarters. Cut the cucumbers (1) in big dices. Cut half a red onions in thin slices. Add a handful of black olives (pitted). If you like it, add big chunks of feta cheese (in some cases, in Greece, you have a whole slice of feta on top of the salad, and you break it when you eat it). Add some roughly chopped parsley (or oregano), salt and white pepper.

Mix well with your hands! Let rest for a few minutes to make sure the salt gets into the tomatoes, and the flavors meet each other…

Then the secret: add good lugs of olive oil. Good olive oil. Greek olive oil if you want to be authentic! The bottom of the dish has to be filled with olive oil.

Since my last post was about trout, i thought of adding another recipe with trout. This time, we’re going to use smoked trout, instead of fresh trout. Very easy to find in supermarkets in the US, i highly recommend the smoked trout from Whole Foods.

Buy some frisee salad and keep the yellow part. Do whatever you want with the green part. Cut the trout in medium pieces, and throw it in a salad bowl. Add the yellow part of the frisee, some shallots, some tarragon, and some chervil. Salt, pepper, blablablabla…

For the dressing, use the yolk of a hard boiled egg, the zest of one lemon, and mix them together with some mustard. Add some oil, mixing as you pour it to the mix.

There you go – all done. It’s actually delicious and so simple!

This is a very typical dish, super easy to make and that always impresses your guests. For 2 people, you need: 4 endives, 1 pear, some walnut (crushed), hard blue cheese, walnut oil, cherry vinegar.

Get some endives and clean them. Cut them in slices and discard the bottom (it’s too hard!). Cut the pear in  slices. Lay the pear slices on 2 plates, and add the endives on top of it. Sprinkle the walnut and the blue cheese. Add some walnut oil and some cherry vinegar, salt, pepper.